Choosing a university to enroll in is a responsible task neglected by many applicants. One of the recent examples of an unfortunate choice of higher education facility has just been presented by the Telegraph. It is reported that an Anglia Ruskin University graduate, Pok Wong, is suing her alma mater for £60,000.

The reason for a lawsuit is a "mickey mouse" degree which allegedly prevents the former student from finding a solid job. Ms. Wong studied for a degree at the Lord Ashcroft International Business School, based at Anglia Ruskin University, ranked 72nd in the Guardian university league table.

Although Ms. Wong got a first-class degree, she feels like the payoff from the university is worth it. The UK Independence Party vice-chairman, Mark Anderson, tweeted in support of Ms. Wong saying that other students have been failed by the UK higher education. Still, not everyone is as supportive! Other Twitter users have expressed surprise saying Ms. Wong should have thought twice when she was getting a degree from a ‘mickey mouse’ university. 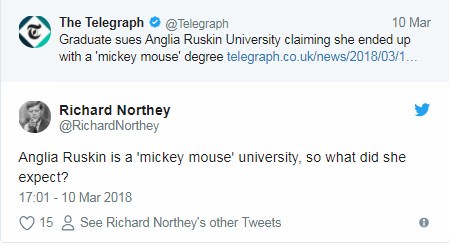 Beware of the University Fraud

The legal papers presented in support of a lawsuit show that the university is also making fraudulent claims of being the “world-leading research” center. However, based on the university rankings by The Times Higher Education, it’s rated over 301-350th place globally.

This is not the first time when students demand a compensation from the university. Allegedly, Anglia Ruskin had received more student complaints and court appeals than any other UK university. The total number of 992 during 2012-2013 implies that what is promised isn’t delivered.

In Memoriam: 6 Lectures by Stephen Hawking That Changed Our View Of Time and Universe